#CBR6 Book 131: The Hero and the Crown by Robin McKinley 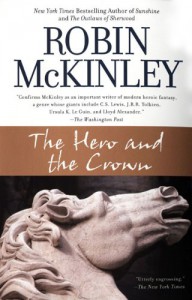 Disclaimer! This was granted to me by Open Road Integrated Media through NetGalley in return for a fair and unbiased review.

Aerin is the lonely, ostracised daughter of the ruler of Damar. She has pale skin and fiery red hair amongst a people who are bronzed with dark hair. She cannot even remember who first told her the story, but she has known for as long as she can remember that her mother was a commoner witch-woman who came from the North, who ensorcelled the king into marrying her, swearing she would bear him an heir. When she bore a daughter, she died of despair. While most of the common folk and the servants love her for her gentle, generous and unspoiled manner and the fact that she has taken upon herself to rid the countryside of the small, yet fierce dragons who threaten livestock and snatch the occasional baby to eat. The higher born, especially most of her royal cousins are deeply scornful of her, calling her names, mocking her and never letting her forget her half-blood status.

The one exception is Tor, the heir to the throne, one of her cousins. Since she was young, he has been kind to her, and he has taught her to ride, to use a sword and other soldierly arts. As she comes of age, it becomes very obvious to everyone in Damar that Tor is in love with the witch-woman's daughter. That she has managed to combine herbs to make a fire-proof ointment to help her hunt dragons or successfully trained the king's old, injured war horse back to health is turned into sinister and negative things rather than admirable and impressive ones.

There is more discord spreading in Damar, and the common belief is that all the problems would be solved if the ancient crown, lost some generations ago, was found. Even after Aerin is nearly killed, becoming severely damaged when single-handedly killing Maur, one of the enormous, ancient dragons, the popular opinion of the court is against her. While recovering, she has dreams about a mysterious man, who claims she needs to find him, so he can aid her further in saving Damar, and when she's at her absolute lowest, convinced everyone will be better off without her, she goes off to find him. Can Luthe, this stranger from her dreams, heal her and train her into facing her greatest fears? If she fails, it means the destruction of Damar and all the people she loves.

In late September, I started reading Robin McKinley's most recent book, Shadows, which I didn't even make it a third through before I had to abandon it. It was written in some made up teen speak and the characters and story was so unengaging that I just didn't have the patience to finish it. Now, considering the literary quality of some of the books I HAVE managed to read this year, this says a lot. So when I was offered one of her classic works through Netgalley, the prequel to possibly my favourite of her books The Blue Sword, which I will be re-reading as soon as I can dig out my paperback (as it sadly doesn't exist in e-book format yet), it seemed like a very good way of getting the figurative bad taste out of my mouth.

While Aerin has a pretty sucky childhood, growing up with only the older Tor or her maid as her closest friends, she seems to grow more confident, or at least less self-conscious and bothered about what others think of her and the possible motives of her long dead mother. She's brave, kind and persistent, with a gift for scientific thought that allows her, after years of trial and error, to recreate a long believed to be mythical ointment that is immune to dragon fire. Her patience and perseverance wins her the loyalty of her father's injured and anti-social war horse, who through the training that Aerin slowly coaxes him to do, eventually becomes almost his old self again.

Her father and Tor clearly love her, and it is made clear that many people in rural Damar see her as a hero. Yet Aerin cannot get over the constant digs and misgivings from those around her, and their malicious gossip is also what lets her fall under the spell of the evil dragon Maur, whose powers don't diminish even though he has been killed. Some enterprising people drag his skull back to the capital, and the dragon's malevolence, combined with the horrible burns (her ointment doesn't work against the fire of ancient dragons) and injuries she sustained, nearly kills her.

This is a great book, generally aimed for a middle grade to younger adult audience, I think. Aerin is a wonderful role model for young women. She's an outcast, but works to overcome her many challenges. She rarely masters something on the first try, all Mary Sue like, but practises and trains, using her perseverance and inner strength to succeed. She is loyal and brave, risking her life time and time again at thankless tasks, only to have most of those who should have been her strongest allies undermine her and gossip about her perceived evil intentions. While I didn't love it as much as some other McKinley books, I'm so glad I got a chance to read this, especially after Shadows turned out to be such a disappointment. Turns out that McKinley's early career is a lot more to my taste than her recent literary efforts.