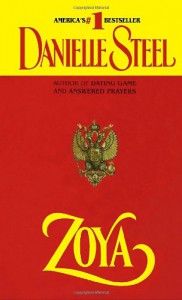 Zoya Ossupov, a young noblewoman, second cousin to the Tsar himself, lives a sheltered life of luxury in St. Petersburg. When the revolution breaks out, Zoya´s grandmother, who has seen which way the wind was blowing, bundles up the many garments they´ve sown jewellery into and Zoya and they flee the country through Finland. Having lost her father, mother and elder brother in only a few days and worrying about the safety of her cousins the Romanovs, who were placed in house arrest by the revolutionaries, Zoya has to make a new life for herself in Paris with her grandmother and the one loyal servant who came with them.

Going against the express wishes of her stately grandmother, Zoya auditions with the Ballet Russe and starts supporting their little family as a ballet dancer. The only other money they have is the pittance they can get from selling their family heirlooms, in a market already flooded with Russian treasures. Zoya rejects the elderly Russian prince and the young lodger that her grandmother tries to match her with. Her grandmother wants her to be safe, Zoya wants to marry for love. She falls for an American officer, but he´s old enough to be her father and believes she would be better off without him. Only towards the end of the first World War he realises that they cannot fight their attraction, and Zoya becomes a society darling in New York.

She´s blissfully happy until the Wall Street crash, suddenly widowed with two small children to support. Once again, Zoya´s willingness to work hard sees her safe and comfortable within a few years, and eventually she even finds love again. Then the second World War arrives, and both Zoya´s new husband and son are determined to fight for their country. Will another conflict cost her more of the people she loves?

I´m pretty sure that this is the first novel I´ve ever read by Danielle Steel, and having read it, I can see both why her books are incredibly popular among some readers, and completely panned by others. I´m not going to pretend that I thought this was great literature, some of the descriptions and info dumping was a bit heavy handed and the plot was possibly a bit too packed, but it was an entertaining book and it reminded me that I´ve always found the Romanov family and their fate fascinating (even before I watched Anastasia. So it´s spurred me to add two non-fiction books about them to my TBR list and they will be part of my reading list for CBR7.