#CBR7 Book 62: Into the Shadows by Carolyn Crane 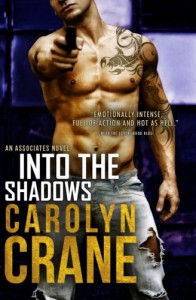 Thorne McKelvie has meticulously and ruthlessly worked his way through the ranks of criminal organisation the Hangmen, a group that doesn't shy away from human trafficking in sweat shops, drug or arms smuggling. The leader of the Hangmen is suspicious of Thorne, however, and worried that he is gunning for his spot next, taking over the whole organisation. So after a series of unexpected attacks on the gang and their allies' warehouses, he sees an opportunity to have Thorne framed and removed as a threat. Thorne needs to prove that he's not responsible for the raids, and to do so, he needs to raid the mansion of his former employer, and face the only woman he ever had feelings for.

Nadia Volkov used to be known as "the Party Princess", obliviously spending her father's money and partying with his many henchmen and bodyguards, without really caring what her father actually did for a living or where the money fuelling her extravagant lifestyle came from. Two years ago, she had an affair with Thorne, her father's most dangerous henchman, which ended when he cruelly cast her aside. When Thorne unexpectedly turns up at the house where Nadia is living with her sister, one of her father's former bodyguards, and her young son, she's terrified that Thorne will discover he's a father and that their child will be in danger once his crew mates realise that there is a toddler that can be used as leverage against him. She also hopes Thorne doesn't discover that she, along with some hired goons, are responsible for the warehouse raids he's investigating. After her father's death, she was appalled when she discovered what he'd been responsible for. Having discovered that her mother is probably alive, in one of the sweatshops now run by the gangs who divided her father's assets after his death, she's systematically raiding each one, freeing the enslaved women in order to locate and liberate her mother.

Thorne believes that Nadia just used him for sex, having overheard a conversation where Nadia discussed him with her sister and offered to "share". Filled with self-loathing and with no illusions about his ruthlessness and inability to feel any sort of softer feelings since his sister was brutally killed when they were teenagers and swore revenge, Thorne and Nadia's former relationship was an extended role play on "the princess and the thug". Nadia actually had feelings for Thorne though, and was uncomfortable with the dirty names he wanted her to call him. She never had second thoughts about keeping his child when discovering she was pregnant. When they reunite, the sparks fly once more, but can they have any sort of future, with Nadia responsible for the crimes Thorne is being accused of? He needs to locate and present the individuals responsible to his boss, or be killed.

Nadia also doesn't realise that Thorne worked as a henchman for her father and moved on to the Hangmen as part of a complicated revenge plot. Having been left to die in the desert, surrounded by scorpions, after his sister was murdered, Thorne swore revenge and has been working methodically to wipe out all the men responsible for his sister's death. Working so deep cover for the covert Associates that only the leaders of these secret agents know he's not the hardened criminal he poses as, he only has one man left until his revenge is complete - Jerrod, the leader of the Hangmen.

Due to his past, Thorne is scarred, literally and figuratively. What happened to him and his sister was dreadful, and the flashbacks to his past made me deeply uncomfortable. To escape his chains in the desert, he needed to push himself to the edge of human endurance and he's spent his entire adult life systematically hunting down every man who was present when his sister was murdered, whether they actually took part in the killing or not. Thanks to Dax, the leader of the Associates, Thorne was able to position himself closer to several of the people responsible. Through their alliance, Dax gets access to invaluable intel about a number of criminal organisations, while Thorne was able to get close to the last man on his hit list.

In order to rise to the top of the Hangmen, Thorne has done any number of terrible things. He's a ruthless and hard man. Nonetheless, he's tired of his revenge quests and longs to be done. His feelings for Nadia are complicated. Just when he was ready to acknowledge to himself that he loved her, he overheard her conversation with her sister (which was not at all what it seemed), making him believe she felt nothing for him, means he now thinks of her with what he terms "love-hate". He dumped her before she could dump him, not realising that the evening he coldly rejected her, she was actually about to tell him about being pregnant. Even before the events that set him on his path to vengeance, Thorne never had a good family life and struggles with any human interactions that don't involve dominance and power play.

While Nadia used to find the role playing and abusive language quite exciting, now it makes her sad and uncomfortable, and when they are reunited,and she's unable to deny that her feelings for him are as strong as ever, she tries to express to Thorne that she only ever called him names because he seemed to get off on it. It doesn't take long before the two are growing close again, despite the dangers facing both of them. Jerrod wants Thorne gone, and when he discovers that Thorne and Nadia have a shared past, he has the weapon he needs to bring his second in command down.

As with Carolyn Crane's previous two books in the series, Into the Shadows is full of action, suspense, complicated and wounded people who need each other to try to make sense of the world. There is a emotionally struggling hero seeking revenge and justice, and a capable and determined heroine. The villain is once again truly despicable, making it abundantly clear that while Thorne isn't a boy scout by any stretch of the imagination, he's in the right in taking Jerrod down. I really liked most things about this book, however, I would have liked even more present interaction between Nadia and Thorne, rather than so many flashbacks. I also found some of the internal machinations of the Hangmen a bit tiresome. It was a fun, suspenseful, sexy read, though. The book is nominated for a RITA in the Romantic Suspense Category, and it is a well deserved nomination. Ms. Crane also self-publishes her very entertaining Associates novels, so consider buying a copy so she can afford to keep writing.