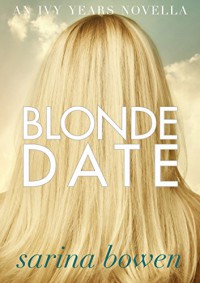 Katie Vickery is a sorority pledge and there is no way she can show up to a party without a date. Having just broken up with her jerky football player boyfriend, she's at a bit of a loss, until her roommate Scarlet sets her up with a childhood friend, Andrew Baschnagel. While Katie normally dates football players, at least Andy is an athlete and an upperclassman, even if the sport is basketball. Of course, Katie pretty much wants to eat worms than go to the party, as her lowlife ex is going to be there, along with his fraternity brothers, in front of whom Katie was humiliated. Yet it's an important night, so Katie's going to suck it up and put on a brave face. She can tell instantly that Andy's a very sweet guy, even though he's way taller than she's used to and she's worried he's going to think she's a complete nutcase.

Pretty much all of Andy's experience with girls comes from his older sisters, one of whom has been advising him over the phone before his big blind date. Having admired Katie from afar since they started taking history together, he can't quite believe his luck when he gets a chance to go out with her, but isn't really thinking that it's going to be more than a one time occurrence. He can tell that she's nervous and upset about something and just hopes it's not because she doesn't want to be seen with a big geek like him. Doing his very best to put her at ease, he's absolutely appalled when she finally confesses why she's so uncomfortable with the idea of seeing her ex-boyfriend again and does his best to help her gain the upper hand and regain her confidence.

After the total angst-fest that was The Year We Hid Away, Blonde Date was like a delightfully refreshing palate cleanser. Having already found out the end point of Andy and Katie's blind date in the previous book, there wasn't much doubt in my mind (even if this wasn't a romance) that things were going to go well for the couple, but it was nonetheless fun to see how they ended up at the point we get an indirect glimpse of towards the end of Scarlet and Bridger's book. Scarlet has two roommates, both named Katie. Initially she doesn't get to know them all that well, because she keeps having to tell them lies about who she is and where she's from, but as the story progresses we get more insight into the Katies, although obviously not as much as we get from this novella.

With alternating chapters showing Katie and Andy's preparations for the date, as well as their actual evening together, it was clear that Katie wasn't the party girl bimbo that she may have appeared initially in The Year We Hid Away. It's also clear that the really awful way she was treated by her ex-boyfriend has made Katie re-assess what she actually wants from her life and I can absolutely see why she's reluctant to paste a pretty smile on her face and pretend nothing is wrong. A lesser woman would probably have broken, but Katie refuses to let her douchy ex get her down for too long. I'm also glad that while it's an embarrassing topic, Katie doesn't wait too long to tell Andy the truth about why she's being so skittish. I also want to reassure readers that while what happened to Katie was humiliating and so above and beyond what is ok to do to a woman, it involves consensual sex and not any rape or sexual assault.

Andy might have been almost too sensitive, understanding and perfect, but as someone who likes my men tall, kind, funny and geeky, I didn't care that he was so flawless he was practically Gary Stu-adjacent. The fact remains, there are nice, inexperienced guys out there who don't assume they're entitled to a woman's affection just because they're not creeps. I thought this novella made some wonderful points about women's agency, the nature of consent, as well pointing out that an actual decent guy doesn't have to promote or constantly mention how "nice" he is. It doesn't hurt that the game Andy proposes he and Katie play to put her more at ease during what could be the most awkward party of her life made me laugh out loud several times. After the darkness and pain of the previous book, I needed some lightness and fun. I see why Mrs. Julien has declared this story an instant classic.