#CBR8 Book 43: The Sport of Baronets by Theresa Romain 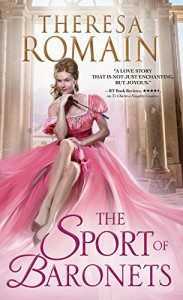 Sir Bartlett Crosby is training the last of his promising horses, Golden Barb, in the hopes that it will win him a sizable prize purse in the upcoming race. Due to his mother's compulsive gambling, he's had to sell off most of the horses in the stable, a lot of land and furniture, and reduce staff considerably. So when Miss Hannah Chandler turns up with a bill of sale that suggests his mother has sold Golden Barb, HIS horse, to the Chandlers, he is less than pleased. To add to matters, while he is arguing the impossibility of this transaction with Miss Chandler, the horse is stolen away by his head groom, leaving several other of the grooms knocked unconscious.

The Crosby and Chandler families have had a vicious rivalry for decades. Hannah and Bart join forces to investigate both why the bed-ridden Lady Crosby would authorise the sale of their family's last hope to greatness to her worst enemy, Hannah's wheelchair-bound father and where the horse in question has been taken. Over the course of their joint investigation, they quickly discover that while their parents may hate each other, they in fact feel quite strongly attracted to one another. Will they locate the stolen horse? Will they resolve who owns the horse in such a way that they can still face each other afterwards? Can they attempt to overcome the family feud by joining forces, permanently?

I've read a number of Theresa Romain's novels now, and while she has impressed me with her writing, she's never really emotionally engaged me on a level that my favourite romance writers do. I am a deeply emotional reader, and a clever way of crafting your narrative isn't going to get you too far if I don't care about the characters and the setting I'm reading about. In this novella, however, possibly because the story is so short and contained, I was really impressed and enjoyed reading about Bart and Hannah a lot more than has been the case in my previous attempts at Ms. Romain's writing.

It may seem as if the two get over their families' supposed animosity for each other very quickly, but at the same time, it's clearly established that the feud and rivalry is really the product of their parents, not them. Bart has always heard all manner of bad things about the Crosbys, but hasn't really seen Hannah since she was a little girl. He has nothing personally against her, except her family name. Hannah, on her part, has always heard that Sir Bartlett is an irresponsible rake and a dandy, not to be trusted, but it's quite clear to her that he works very hard to train his horses and that he's doing his very best to try to patch up his family's ruined finances. She also discovers that he's frequently prone to saying exactly the wrong thing to a woman, and therefore strongly doubt her father's word that he's a libertine and a rake.

Bart puts all his hopes on Golden Barb to win him enough capital to start rebuilding his stables, thus allowing him to breed more champions and slowly recouping all the money his mother gambled away. Until his mother had a stroke, he foolishly let her run the family estates, not realising just how extensive her gambling addiction had taken them into debt. Now she uses her feebleness and recovery from the stroke to ignore any and all unpleasant conversations, preventing her son from properly taking over as head of the family.

Hannah wanted to buy Golden Barb to have something that was hers and hers alone. The youngest child in her family, she has never really gone anywhere and instead stayed by her father's side, aiding him in business since she was old enough. She saved up her own pin money for the purchase price of the horse, and as such has lost a considerable amount when the horse is stolen. She was also hoping for the price money from the race, to finally give her enough money to go to London, where she could experience the society, dancing and balls she's heard so much about, but never really experienced in her reclusive state in the country. While she's grown up in a wealthy family, she's never really had anything that was solely hers, like the horse was going to be. She needs for Bart to accept the bill of sale as legal, so she can have a chance at a more promising future.

The two investigate and discover interesting things about their parents' joint past that could explain why Lady Crosby may have agreed to sell a horse to Sir Chandler. They also manage to trace the horse thief and locate Golden Barb, but still need to resolve who actually owns him and who's going to get to race him for the prize money. None of them doubt that he will be the winning horse.

Again, in a novella, there isn't all that much time for misunderstandings and complications. The issues at hand are resolved without too much anguish on either side and based on this story (which is setting up Ms. Romain's new series), I am looking forward to the first full-length book, which I've also heard good things about.

Judging a book by its cover: Ah, the current trend of romance covers, where the cover model wears a dress with skirts so voluminous they could hid a multitude of sins, or even people. There are just miles and miles of skirt on that cover, and still, they appear to be cut so that the lady's legs are bare to the lower thigh. I will give them props for having the dress be empire-cut, that at least is period appropriate. I don't really think her slippers are, but they look fairly generic and are not offensive in and of themselves. I find this frothy confection of a pink dress especially amusing on the cover, as Hannah, the heroine, wears nothing but a series of riding habits in the novella, with one notable exception, when her morning dress looks nothing like this candy-coloured ballgown. As there is a scene where the hero and heroine sit and converse on a black and white-tiled floor in the entrance hall, the background is actually quite appropriate and they have given the cover model a riding crop to hold, so I guess I should be grateful that they've at least given nods to the story within. Seriously though, that skirt. It could carpet a small room.