#CBR8 Book 56: On the Way to the Wedding by Julia Quinn 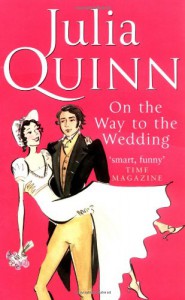 Gregory Bridgerton is the second youngest of eight siblings and the last of the Bridgerton offspring to remain single. Having seen all of his siblings settle into loving marriages, he is certainly a believer in true love. He just hasn't met the right woman yet. He's quite convinced he'll know once he finally meets the one. Only, when Gregory finally falls in love with a woman, the charming and stunning Miss Hermione Watson, she's already in love with another man. Her father's secretary, to be exact. Her best friend, the practical and constantly-overlooked Miss Lucinda "Lucy" Abernathy, wants to save her friend from a bad match and of all the men who have fallen head over heels for Hermione, Gregory Bridgerton seems the most promising. Lucy sets out to help Gregory woo Hermione, but instead falls for him herself.

Which is an unwanted complication, as Lucy has been practically engaged for years and years, a very promising match her uncle made for her. He has finally signed the papers and has absolutely no intention of letting her back out of the contract because she is in love with another man. By the time Gregory realises that he's not in fact in love with Hermione, but with Lucy, it may be too late for him to do anything about it. The woman he loves is about to marry someone else. Can he stop the wedding before she says "I do"?

By the time I got to Gregory's book in my big Bridgerton re-read, I got distracted by other books and it kept being pushed further down my reading list. The other week, however, when I'd forgotten my e-reader at work (the horror!), I pulled up the Kobo app on my phone and this was one of the last books I'd purchased. That seemed as good a time as any to pick it up, and as is pretty much always the case with a Julia Quinn novel, once I'd started, I finished the book ever so quickly.

With the exception of Hyacinth's book, the books in the latter half of the Bridgerton series are good, but not amazing. One of the best things about the series, is the family interaction, but with all of his other siblings happily married off, there aren't that many of them to make appearances in the book either. Hyacinth does show up, thankfully, and the always wonderful dowager Violet Bridgerton is present, but I missed some of the laugh out loud moments from previous books.

Gregory is a romantic, which is sweet. Unlike many of the previous heroes in the series, there is never any doubt in his mind that he will get married - he wants to - but he also wants to make sure he finds the right woman. As he was very young when his father died, he never really got to see much of the devotion his parents had for one another, but he was practically raised by his brother Anthony, whose marriage to Kate is an equally harmonious one.

Lucy is one of those heroines whose best friend is the prettiest and most sought-after of all the ladies of the season. She's used to being completely overlooked, or only ever approached to curry favour with Hermione from the hordes of men who fall at her feet. Not that she minds in the slightest, as she is a) practically engaged already, and thus doesn't need to worry about attracting suitors and b) a loyal and supportive friend. Her main worry about Hermione's infatuation is how unsuitable the match is. She suspects that her friend could never be truly happy married to a man with such a different standing to her own, and because she can see what a great guy Gregory is, she does what she can to aid him in wooing Hermione. Not that it works in the slightest, but it brings Lucy and Gregory into contact more often.

As is frequently the case, the villain of the piece, who making the path of true love run less than smoothly is a weak part of the novel. Quinn so rarely manages to do good antagonists and the books where there is no outside party trying to interfere with the lovers are generally better. I do like that the latter half of the book doesn't exactly play out as expected and that Lucy's fiancee is rather lovely, even though his dad is odious. At some point, I will get round to reading the new Julia Quinn book, featuring the Bridgertons' aunt Billie, but as reviews of that book have been decidedly mediocre, I'm not in a hurry to pick it up just yet.

Judging a book by its cover: I have the UK paperback version of On the Way to the Wedding. Piatkus, Julia Quinn's UK publisher, uses these quaint hand-drawn covers for all of her books, but some work better than others. In general, I like the UK ones a LOT more than the US ones, but I really am not a huge fan of the couple on this book. The image fits quite well with the contents of the story, at least. I also think the man, whom I assume to be Gregory, should possibly have been wearing colours that didn't clash badly with the mauve background.

Historical Romance regency Julia Quinn re-read my-books hist fic challenge 2016 women writers 2016 how many books 2016 cbr8 romance 16 bridgertons
Source: http://Gregory Bridgerton is the second youngest of eight siblings and the last of the Bridgerton offspring to remain single. Having seen all of his siblings settle into loving marriages, he is certainly a believer in true love. He just hasn't met the rig
Tweet