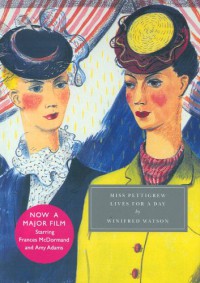 Miss Guinevere Pettigrew is a desperate, middle-aged governess, pretty sure that she's unlikely to find many more jobs, who by accident is sent to to the wrong address by the employment agency. Instead of a mother looking for a new child minder, she meets the glamorous and vivacious singer/actress Miss Delysia DeFosse (NOT her real name) and before she knows it, Miss Pettigrew's rather colourless and boring life is full of high drama and romance.

Delysia has not one, not two, but three suitors that she appears to be juggling and she's absolutely terrible at confrontations and making up her mind about what she really wants. Miss Pettigrew can't stand to see her being upset or bullied, and steps in to help whenever she can. While she may have been sent to the wrong address, she can't stand by and see a beautiful young woman in distress. Delysia is delighted, and insists on Miss Pettigrew coming along on new adventures throughout the most exciting and eventful day the lonely spinster has ever experienced.

One of the last few times I was in the US (not this summer), I watched the movie adaptation of Miss Pettigrew Lives for a Day with my best friend. Such a wonderful cast, with Frances McDormand absolutely perfect as Miss Pettigrew, Amy Adams absolutely radiant as the bubbly Delysia, Ciaran Hinds (the only Captain Wentworth worth mentioning) as the man Miss Pettigrew finally experiences romance with, and the stunning Lee Pace as Michael, the suitor it's clear Delysia must end up with, as they are perfect together. I was so charmed by the movie and in preparation for this year's US trip, I decided to read the book to remember the fun time I had watching the movie.

The book (and film) very much has the elements of a screwball comedy or a farce. There's a lot of people being pushed out doors just as others are entering and tons of drama and complications, before everything sorts itself out in the end. Poor Miss Pettigrew has lived a life of drudgery, mostly overlooked and unappreciated. She clearly doesn't particularly enjoy taking care of other people's children and in the late 1930s (when the book is set), with war looming, she's quite aware that she may be out of employment permanently soon. She keeps getting swept along in Delysia's drama, postponing her confession that she's there for a job interview (and the scatter-brained young actress never seems to question why Miss Pettigrew shows up on her doorstep in the first place), because she doesn't want her exciting interlude from real life to end too soon.

Anyone expecting deep and profound revelations or in-depth explorations of the various characters in this book are going to be disappointed, as they are really more generally sketched. The whole book does (as the title promises) take place over the course of a day and we get a snapshot into these people's lives. There is not a lot of time spent dwelling on the inner life of Miss Pettigrew or her previous life as a governess, but we are given enough to understand that she is a good and decent woman, who is deeply alone and desperate for a change.

One of the things I really liked is that despite Miss Pettigrew being from a conservative family and strict upbringing, occasionally briefly shocked by a few things, she firmly refuses to judge any of the people she meets and there is absolutely no slut-shaming, despite Delysia clearly struggling to get rid of a one night stand in the morning, before the (somewhat scary and very wrong for her) man who basically keeps her housed and in expensive clothes and jewelry returns to discover he's been cuckolded, plus has a dashing third man wanting to marry her. I also liked the mental image Miss Pettigrew builds of Michael, until the man actually appears in the latter half of the book and it's obvious to everyone that he's perfect for Delysia (who really isn't great at standing up for herself).

After a lifetime of being ignored, Miss Pettigrew is seen, acknowledged and appreciated, not just by Delysia, but as the day progresses, several of her friends. She drinks quite a bit of alcohol, she smokes a cheroot, she receives a make-over, she goes to a night-club, she dances with a handsome man and she gets to witness a punch-up. How can she ever go back to a life of raising other people's children? I don't want to spoil the ending, but I am happy to reveal that Miss Pettigrew gets just as happy an ending as Delysia eventually does, with the promise of more days truly worth living in her future.

If you haven't read this book, do yourself a favour. Read the book, then see the film - they are both so worth it. You'll have a delightful time.

Judging a book by its cover: Not really much to say here. It's grey. With a little with square letting you know the title and the author of the book. This may be the most depressing packaging of classic books I've ever seen. How in the world is this going to inspire people to pick up and read these books?