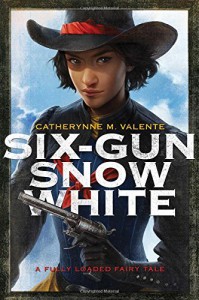 From the blurb:
From New York Times bestselling author Catherynne M. Valente comes a brilliant reinvention of one of the best known fairy tales of all time. In the novella Six-Gun Snow White, Valente transports the title's heroine to a masterfully evoked Old West where Coyote is just as likely to be found as the seven dwarves.

A plain-spoken, appealing narrator relates the story of her parents - a Nevada silver baron who forced the Crow people to give up one of their most beautiful daughters, Gun That Sings, in marriage to him. With her mother's death in childbirth, so begins a heroine's tale equal parts heartbreak and strength. This girl has been born into a world with no place for a half-native, half-white child. After being hidden for years, a very wicked stepmother finally gifts her with the name Snow White, referring to the pale skin she will never have. Filled with fascinating glimpses through the fabled looking glass and a close-up look at hard living in the gritty gun-slinging West, readers will be enchanted by this story at once familiar and entirely new.

This novella is a clever retelling of the classic German fairy tale, Snow White and the Seven Dwarves. Having moved the narrative to the Old West, the girl at the centre of the story, the half-blood daughter of a Crow Native American woman and a wealthy prospector, grows up alone and unloved on her father's ranch. She entertains herself with card tricks and sharp shooting, her only companions the impersonal servants and the wild animals in the ranch menagerie.

When her father eventually remarries, it is to a beautiful young woman who takes it upon herself to civilise "Snow White", as she names her stepdaughter. Mrs H's lessons of love involve Snow performing the duties of all the female servants (all of whom were let go after the wedding), nearly drowning in icy milk baths meant to make her skin paler and various kinds of physical and emotional abuse. Having never had anyone show her any attention at all, Snow takes it all, without complaining. Her stepmother has a dark and mystical mirror, where Snow sees visions both of herself, and Mrs H's past. Eventually her stepmother gives birth to a baby boy, but only in the mirror. The child seems to grow fast and he and Snow have a strange connection.

Snow leaves the only home she's ever known, riding off to find the Crow, hoping to reunite with her mother's people. She travels through frontier towns and mining villages, defending herself against all manner of aggressions. She spends some time prospecting in a ruby mine along with seven rugged men. A ruthless Pinkerton agent trails her tirelessly, hired by her stepmother to catch her, so he can cut out her heart and bring it back to Mrs. H. Snow can be bested by no man, however, and escapes the detective with her heart intact.

Eventually arriving at a town populated by women, cast out from other places, Snow begins to find some solace and peace. The reach of her stepmother's powers are long, though, and once Snow stops running, she'll be easier to catch.

The story is told in an oddly poetical manner, narrated in a special cadence, which even when you read it seems very oral. Transposing the classic fairytale to a new setting makes you see the story in a new light. Valente certainly makes the story more feminist and diverse, highlighting how lost Snow is, never fitting into her father's world, or that of her mother. Mrs. H, Snow's stepmother isn't merely a one-dimensional villain. It is made clear that the way she treats Snow is a somewhat harsher way than she herself was treated before she got married. Mrs. H turned to witchcraft to gain power, Snow runs away instead. Only towards the end does she see the caring and nurturing side of womanhood.

This novella incorporates a lot of mythology, both Native American and Western. It plays with the reader's expectations and the well-known story tropes, re-inventing the old tale for a new time. Because the narrator imposes a sort of distance in the way the story is told, I never emotionally connected with it as much as I wanted to, but I was entertained and impressed. It's also not a very long story, so I didn't have time to get bored - which was not the case when I read Valente's twist on Russian folk tales, Deathless.

Judging a book by its cover: The Charles Vess cover for this novella is absolutely gorgeous. Snow triumphantly rearing on her loyal horse Charming. Her stepmother, Mrs H, kneeling holding up a bloody heart. The various animals and creatures of the wilderness coming in from the left, looking as if they're about to stampede over the stepmother. I pretty much love everything about this.