#CBR8 Book 117: The Only Thing Worse Than Me is You by Lily Anderson 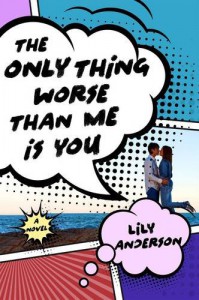 Beatrice "Trixie" Watson has two goals for her senior year. She wants to save enough money to buy the collectible Doctor Who figurines at the local comics shop and she intends to knock her nemesis, Benedict "Ben" West down to fourth place in their fancy prep school ranking. The two have always had a tense and antagonistic relationship, going all the way back to when Ben caused Trixie to break her arm on the monkey bars during first grade. This year, she is determined to do everything it takes to crush him academically.

Ben and Trixie's friends, however, are less than thrilled about their decade-long rivalry, which only seems to be getting more mean-spirited with every year. When Trixie's best friend Harper starts dating Ben's best friend, Cornell, they are forced to spend more time in each other's company and their group of friends is adamant that they need to stop the constant sniping, as it's getting on everyone's nerves. Once they start actually talking civilly to one another, they discover that they share many geeky interests and possibly they don't need to savage each other verbally every chance they get.

As the school year proceeds, several students get accused of cheating, an unforgivable offence at a competitive school like Messina Academy for the Gifted. The group think little of it until one day, it seems these people may have been framed, by none other than Harper, who is immediately expelled. Cornell seems to abandon her and Trixie is furious. Will Ben pick Cornell's side or help Trixie investigate and clear Harper's name?

Back in July, Caitlin gave this book 5 stars over on the Cannonball group blog. A clever YA retelling of Shakespeare's Much Ado About Nothing, where all the various characters are nerds of all varieties attending a prestigious prep school? They are deeply opinionated about Firefly andDoctor Who (more on that later) and flirt about Saga. How could I not love this? While Caitlin said that all the nerdy references didn't work for her, they were part of what made me really get into the story. It really is so well done, and the modernised take on how Harper/Hero is ruined is much better than ZOMG! She may not be pure as the driven snow! of the original play and they don't actually have to fake anyone's death to resolve things, I was amused and happy throughout the story, with one notable exception.

Lily Anderson is a school librarian and has clearly spent a huge amount of time around teenagers. That much is clear. She's probably done quite a lot of research into the various fandoms she has her characters geek out about. She cannot, however, have spoken to anyone sane about Doctor Who, because in a moment that pretty much felt like a nails down the chalkboard, abrupt record scratch sort of an incident, she has her two main characters discussing their favourite Doctor Who episodes. Trixie claims her favourite episode is the Neil Gaiman-scripted The Doctor's Wife. As this is also my favourite, so far, so identifiable. Then Ben proceeds to say that no, his favourite episode is Nightmare in Silver (also scripted by Gaiman).

And I almost had to throw my e-reader across the room. I interrupted my focused Read-a-thon reading to rant loudly at my husband (the biggest Doctor Who fan I know) about this for some time, and it made me so sad, because up until that point, this book was well on its way to becoming a five star read. But no one in the history of ever who has actually watched the show and knows anything about how the episodes are recieved would have a character claimNightmare in Silver was their favourite episode. It may have been written by Neil Gaiman, but it's also acknowledged by Gaiman himself, and Steven Moffat, the current showrunner, as a failure of execution and it's frequently rated as one of the least popular in the show's fifty year history in fan polls. As well as ranting to the husband about it, I posted about my outrage on Goodreads, and got support from others that this wasn't just a plotline choice that bothered me, but seemed baffling to others, as well.

I did stick with the book, although more filled with scepticism and distrust than before. The various twists and turns of the original play really are very well modernised and while I'm not entirely sure about the motivation of the person who is eventually revealed to be behind framing Harper, as I said, no one had to fake their death and there was a lot less judgemental virtue-shaming. The book clearly takes inspiration from great movies like Mean Girls and 10 Things I Hate About You. Even two months later, the complete failure on the author's part to properly research Doctor Who still upsets me, though. To someone less nerdy than me, this will probably not be such a big deal. If you like Shakespeare and/or cleverly written YA, give this book a try.

Judging a book by its cover: With two characters whose lives revolve around nerdy and geeky things and their weekly visits to the local comics shop, and who fall in love while discussingSaga, it seems very appropriate to have a cover evoking comic book panels. The leg up pose while kissing is possibly a bit cheesy, but I'll let it slide. Unlike that thing with Nightmare in Silver. Which is unforgivable!