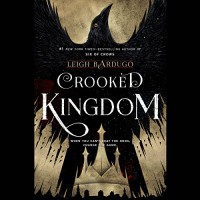 Kaz Brekker and his crew have just pulled off a heist so daring even they didn't think they'd survive. But instead of divvying up a fat reward, they're right back to fighting for their lives. Double-crossed and left crippled by the kidnapping of a valuable team-member, the crew is low on resources, allies, and hope. As powerful forces from around the world descend on Ketterdam to root out the secrets of the dangerous drug known as jurda parem, old rivals and new enemies emerge to challenge Kaz's cunning and test the team's fragile loyalites. A war will be waged on the city's dark and twisting streets - a battle for revenge and redemption that will decide the fate of magic in the Grisha world.

While they pulled off the impossible and managed to get out of the Fjerdan ice court alive, with the only possible source of the dangerous superdrug jurda parem in their custody, Kaz Brekker and his little band of outlaws didn't get to retire with their unbelievable wealth, celebrating their victory. The brilliant Kaz was in fact outsmarted and out-manoeuvred by the deceitful Councilman Van Eyck, and now his beloved Wraith has been abducted and the gang have less than a week to rescue her and orchestrate their revenge. If their previous mission was dangerous and hard to complete, this one is possibly going to be even harder. They have no money, no allies, there are a number of hostile parties trying to kill some or all of the group and time is running out.

The action of Crooked Kingdom takes the reader back to Ketterdam, where Kaz, Matthias, Nina, Jesper and Wylan have to work together against steep odds to outsmart Van Eyck and their other enemies, rescue Inej, make sure the only living source of jurda parem gets out of the city safely and finally get paid the money they were promised. As in Six of Crows, the action takes place over a short space of time and everything that could go wrong, seems to have turned against our heroes and heroines. These two books should ideally be read together, as they don't work seperately and the stories complement each other so well.

I bought this audiobook on Audible pretty much the second I'd finished Six of Crows, as I had to find out what happened immediately. The book is even longer than the first, and yet I listened to the whole thing in less than three days. In this book, Wylan also gets his own chapters, and his narrator on the audio didn't entirely work for me. It was especially the way he made Kaz sound (as in Wylan hearing Kaz talking). He made his sound far too nasal and high-pitched, like a strange parody version of Wallace Shawn doing Vizzini in The Princess Bride. It was distracting and took me out of the story a little bit.

I mostly really loved this book, and I especially loved the way it tied everything together with Bardugo's first trilogy with some very cool cameos. I must admit that I liked a certain privateer character a lot more in his appearance here than I did in the Grisha trilogy. He fit better, somehow. The one thing I didn't like was the choice Bardugo made close to the ending. I think the only reason she did it was to try to inject even more darkness and grittiness to the story, which really was not necessary if one considers how dark the books already go in depicting Kaz's past and how he lost his brother, Inej's separation from her family and forced prostitution, what Wylan discovers about his parents, Matthias' time in prison, how Nina had to survive in Ketterdam and so on. What she chooses to do in the final act of the story feels cheap and actually robs the story of something, and it made me absolutely furious.

Vague spoilers for Ruin and Rising and also this book. At the end of this book, a character is actually pretty much resurrected with magic, from the point of actual honest to god death, just so our heroine can have a happy ending of sorts. This storyline actually makes the huge sacrifice of said character mean a lot less and while it would have been a bit of a bummer ending for the book, it would have felt appropriate with what happens earlier in the plot. Instead we get a "everybody lives" situation, and the characters haven't actually sacrificed much of anything, they end up exactly where they'd be happiest.

I have a theory that Bardugo possibly regretted this ending somewhat, and therefore decided to prove that she could be ruthless and there could be personal loss and despite the character's saying of "No mourners, no funerals", she wanted them to have to say goodbye to one of their own. It's a very Joss Whedon-y move, offing one beloved cast member just so the others will be extra sad, and it annoyed me as much here as it tends to do in Whedon's work.

Bardugo's choice, which I think seriously takes away from my enjoyment of the book, makes me deduct one star from the total rating. Nonetheless, this is the end of an excellent duology and the promise that Bardugo showed in her first three books has developed even further into a great pair of books. As well as continuing the plotting and scheming with a new and different heist, all the romantic promise in the first book comes to fruition in this book, with three amazing couples, all of whom I loved to read about and spend time with. These characters are all, in their way, so damaged and broken, they have such pain in their pasts and need each other so very much. For characters so young, they have lived through so much pain. By the end, there is a promise of a better life for them, and I really hope that if Bardugo continues to write books from her Grishaverse, we meet some of them again in future instalments.

Judging a book by its cover: Another cover combining towering buildings and a dark and ominous crow. I don't really have another way of saying that I love these covers, so I'll just leave it at that.