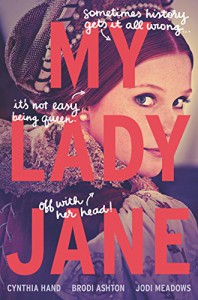 According to history, when King Edward VI, Henry VIII's son died young and childless, certain noblemen who wanted to make sure a ruler of the Protestant faith ruled the country put his young cousin Lady Jane Gray on the throne. She ruled for nine days, before Mary Tudor arrived with her armies, removed the poor girl and had her beheaded. This book bears a vague resemblance to that story.

In the England of this story, the conflict in England isn't between Catholics and Protestants, it's between non-shapeshifters, also known as Verities, and shapeshifters, better known as eðians (pronounced eethians). King Henry VIII himself turned into a great big lion, on occasion, but even so, the eðians are generally hunted and distrusted by the populace in general. Princess Mary is staunchly against them and want them all killed, while young King Edward and his best friend and cousin, Lady Jane Grey read everything they can about them and would like nothing more than to discover eðian abilities of their own.

Sadly, Edward appears to be dying. He has been told by Lord Dudley, his chief adviser and his physicians that he's suffering from "the affliction" and that he is unlikely to have long, certainly not long enough to marry and produce a male heir. Luckily Dudley has a plan to secure a succession that will make sure an eðian-friendly ruler ends up on the English trone. He suggests that Edward change the line of succession to ensure that his cousin Lady Jane's heirs inherit. Of course, Jane needs to be married to produce heirs, but Dudley has just the candidate. His younger son, Gifford. There is the minor difficulty that Gifford Dudley is an eðian and spends every day from sunup to sunset as a magnificent stallion, but any heirs would be conceived at night anyways, so Dudley is sure Jane wouldn't mind too much.

When the extremely intellectual Jane finds out that she's to be married off within a few days, she travels to the Dudley estate (carrying with her a suitable supply of books to entertain her) to meet her intended. Unfortunately, because of some rather shameful nightly pursuits, Gifford (just call him G) has let it be known that he's a rampant womaniser. It's more socially acceptable than what he gets up to. Hence his older brother mistakes Jane for one of his younger brother's many suspected floozies and Jane believes her impending husband is a lecherous libertine (he's not, he's actually a poet). Nor does anyone deem it appropriate to tell her about her husband's eðian status, so she has quite the surprise the morning after her wedding, when the groom turns into a big horse in the middle of her bedroom.

As Edward takes a rapid turn for the worse shortly after the wedding, his sister Elizabeth warns him that he mustn't trust his physicians and he realises that Dudley is up to no good, and that Jane may be in terrible danger as well.

This is a delightful farce of a book, where we follow the points of view of Edward, Jane and G (he never liked the name Gifford) as the story progresses. Since there are three authors, I suspect each of them took one character and wrote their sections. Having loosely based the first half on actual historical events (if you ignore the shapeshifters), the second half is pure fantasy and a lot of fun. The book is clearly inspired by The Princess Bride, with the narrators occasionally interrupting the narrative to address the reader directly. Readers will recognise that most of Gifford's poetry is strikingly similar to that of one William Shakespeare. There is humour reminiscent of Monty Python and Blackadder, while at least one plot development brings to mind the lovely Ladyhawke, one of my favourite eighties movies (I'd love to get a version with a non-synthy soundtrack).

I've seen this book included on several best of 2016 lists, and while I'm not sure I enjoyed it enough to include it in my top ten of the year, it's a very enjoyable romp from start to finish. My one complaint is that the book is a bit long and I think some of the parts in the second half could have been edited a bit more. As a huge fan of Tudor history in general, and having always been sympathetic to poor Lady Jane, the nine days queen, who really didn't have much choice in the matter and was a political pawn her entire life, it was nice to see a story that reimagines a much happier ending for her. Possibly not the book for you if you take your history very seriously, but highly recommended for anyone who wants a fun, creative and irreverent reimagining of history.

Judging a book by its cover: While on first look, this may seem like any old historical novel, with your red-headed girl in Tudor era clothing and a big red font bringing your attention to the title, you need only take a closer look to see that there's more here. In little "hand-written notes" and arrows pointing to the girl on the cover, the writers explain that "Sometimes history gets it all wrong". The other notes say "It's not easy being queen" and "Off with her head".