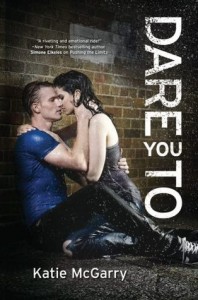 To say that Elizabeth "Beth" Risk has a sucky home life, would be an understatement. Beth's mum is an alcoholic and recreational drug user, with an abusive boyfriend. Yet Beth feels responsible for her father leaving them, years ago, and is willing to do whatever it takes to keep her mother out of jail, even if it means taking a beating now and again. Thanks to the help of her two best friends, Noah and Isaiah, she manages to stay mostly safe. Neither of the two boys think she should be protecting her mother the way she does. When Beth's mum smashes up her boyfriend's car, and Beth takes the blame for it, getting arrested so her mother doesn't violate her parole, the two foster care boys are relieved when Beth's uncle, Scott, arrives to bail her out of jail, and demands that she stay with him until she turns eighteen, even if it means they won't get to see her much anymore.

Scott is her father's younger brother, who knows exactly what sort of a dead beat Beth's father was. He left to become a baseball pro while Beth was still a little girl, and has just moved back into town with his wife. Unless Beth agrees to stay with him until she turns eighteen, and follow his rules, he'll make sure the police know all about Beth's mother and the things he found in her flat when he came looking for Beth. Defeated, Beth agrees, even though Scott's new wife is less than thrilled to have what she considers a severely messed up juvenile delinquent staying under her roof.

Ryan Stone is the local golden boy, whose baseball skills are likely to get him a career in the big leagues. Of course, most of the town don't know about the tensions he's experiencing at home, with his father shunning his older brother after he came out as gay, or that baseball may not be the only thing Ryan wants to focus on. His English teacher is pushing him to pursue his writing, and has even entered him into a big contest, but his father wants nothing to distract him from baseball games and showing off for talent scouts. He keeps his adrenaline up with constant dares, the hardest one in a while getting the phone number of a stand offish skater girl at Taco Bell. Imagine Ryan's surprise when the skater girl turns out to be the new girl in his school, and the niece of one of his baseball idols, Scott Risk? Of course, Beth still won't give him the time of day, and his friends up the dare from getting her phone number to getting her to agree to a date - but Ryan isn't worried. He never plays to lose, and he certainly intends to win this challenge.

Ryan is great. He's clearly so much more than your standard high school jock from the moment we meet him. While on the surface he has everything - looks, athletic skills, popularity, money - it's very obvious that he's desperately lonely after his beloved older brother left. He's clearly not really shared the true extent to his tense and uncomfortable home life after his father's autocratic decision to shun his eldest son with his closest friends. As well as being a star baseball player, he's apparently a great writer. He's strangely drawn to Beth from the first time they meet, and he's certainly not used to being outright rejected. At first, getting close to Beth is all about winning the dare, but the more time he spends with her, the more he realizes that she's not actually what his first impressions, and the rumours about her, suggest.

Beth is fiercely loyal, even when that loyalty is undeserved and wholly misplaced. Her mother is an alcoholic and an addict, and Beth is the one who tries to make sure the bills are paid and they actually have food in the house. She feels that she cannot abandon her mother, as it's her fault that her father left them, even though he was a dead beat drug dealer, who would should clearly never have been allowed near women or kids. It's clear that Beth has taken beatings from her mother's abusive boyfriend more than once, just to deflect attention away from her mother. Noah and Isaiah try to keep her away from her home as much as possible, but they're foster kids, and don't exactly have the best resources. When her uncle Scott shows up, ready to swoop to the rescue after nearly a decade away, Beth just feels betrayed and she certainly doesn't want to give up her clothes and her friends and become someone she's not just because Scott has finally decided he can take care of her again.

Like in [a:McGarry|4575371|Katie McGarry|http://d.gr-assets.com/authors/1305138891p2/4575371.jpg]'s last book, the chapters alternate between the protagonists' point of view, so you get to know both characters and their thoughts and emotions really well. It's a great way of making the reader sympathetic to the characters, and allows her to explore a situation from several angles. While I really liked McGarry's first book in the series, I enjoyed this one even more, possibly because while both Ryan and Beth's home lives were unpleasant and unenviable, they weren't as messed up as Echo's buried secrets. I'm very much looking forward to Isaiah's book, out in November, and will happily pay for it if I'm not lucky enough to get a NetGalley ARC the third time around.

This book was an ARC from Harlequin Australia, given to me through NetGalley. The book is on sale in hardcover and e-book, worldwide, now.
Tweet