#CBR6 Book 27: The Secret History of the Pink Carnation by Lauren Willig 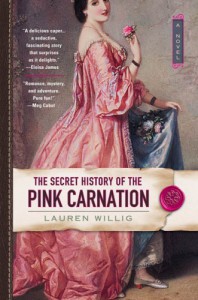 Eloise Kelly is an American history student trying to find material for her dissertation in England. Enamoured of the dashing gentleman spies of the late 18th and early 19th Century, like the Scarlet Pimpernel and his successor the Purple Gentian, what Eloise really wants to do is unmask the identity of the most elusive spy of all, the Pink Carnation, who is rumoured to have stopped Napoleon's invasion of England in 1803.

When Eloise is allowed to browse through a cache of letters and diaries belonging to a descendant of the Purple Gentian himself, a Mrs. Selwick-Alderly, she's pretty sure she's hit the jackpot. The documents tell the story of Miss Amy Balcourt, half French and determined to join the league of the Purple Gentian. When her brother, a member of Napoleon's court, invites her back to Paris, Amy is sure that she will finally get her chance to be a spy and help the dashing Gentian foil Napoleon and restore the French monarchy. She travels to France with her brilliant cousin Jane and the formidable Miss Gwen, their chaperone.

On the boat to Calais, she meets Lord Richard Selwick, who the reader already knows is the Purple Gentian. Having grown up on a neighbouring estate to Sir Percy Blakeney, Selwick succeded the Scarlet Pimpernel as England's most famous spy when Blakeney's true identity was revealed. His cover is that of an expert in antiquities, curating Egyptian treasures for Napoleon, usually boring anyone suspicious of his activities to tears with his dry and long winded lectures. Amy, very well versed in the classics and history herself, is fascinated with Selwick's stories at first, but becomes appalled when she realises he works for Napoleon. She considers him a traitor, and vows to avoid him as much as possible.

Of course, Selwick and Amy keep running into each other. Selwick is soon forced to admit that he's falling in love with Amy, who in turn is infatuated with the Purple Gentian. Selwick is his own rival. Meanwhile, because his feelings for Amy are making him careless, Delaroche, determined to unmask and arrest the Purple Gentian, is getting closer to achieving his goal.

The Secret History of the Pink Carnation is the first of what appears to be a fairly long series of books about flower-monikered spies trying to stop Napoleon in the early 19th Century. It's a mix between contemporary chick lit and historical adventure romance, and the combination works better than I thought it would. The framing device is Eloise's quest to find primary sources for her dissertation, but most of the book is the story of how the Lord Richard Selwick, the Purple Gentian, is unmasked because his love of Amy Balcourt, and how the Pink Carnation, a new spy on the scene, foils Napoleon's plot to invade England.

Willig herself admits to taking some pretty big liberties with the historical details in the afterword of her book, so if you're a stickler for accurate details, then you may want to avoid these books. If you, like me, adore books like The Scarlet Pimpernel and care more about being entertained by a good adventure story than whether certain historical details are a bit fudged, you should possibly check the book out. Especially if you think that The Scarlet Pimpernel would have been an even more awesome book if Marguerite actually had a more pro-active role and didn't just end up being girl hostage.

There are some great female characters in this book, not just Amy and her cousin Jane. Selwick's mother and sister are also hilarious. The men are not the only ones allowed to perform daring acts of espionage and adventure here. Level headed women are essential in saving the day. The framing device with Eloise was probably my least favourite part, with her butting heads with Colin Selwick, Mrs. Selwick-Alderly's nephew, a handsome but arrogant man determined to keep her from finding out his family's secrets. Of course he's gorgeous, and it's obvious to me that Eloise is going to fall for him in later books. Still, I'll happily read through a few chapters of the modern framing story if it gives me more adventures in 19th Century France. The next book appears to focus on Richard's younger sister Henrietta and one of his best friends, Miles. They had some pretty awesome banter going in the first book, and I can't wait to see how they go from friends to lovers.